by Harper Bizarre and Sylvia’s Wrath

Which “Pack is Here” Shirt Are You?

Did you know Rocky is offering up a great new way to show your derby love? Our Pack is Here shirt design is available in a variety of styles, sizes, and colors. Read on to see which one will fit your needs! When you’re ready, head over to https://www.bonfire.com/pack-is-here/ and grab yours today! 50% of proceeds will be donated to The Denver Foundations Critical Needs Fund. (http://www.denverfoundation.org/Community/Impact-Areas/Critical-Needs)

There might not be any sports to watch right now, but that doesn’t stop you from yelling expletives to every newscaster on your TV or making do with old games on ESPN and NFL Network. With our “Pack is Here” baseball tee, you’ll be looking good when your drinking kickball league starts back up. (P.S. Could you take a minute to ask ESPN why they don’t play roller derby?)

You’re a junior skater and can’t wait to show off your derby pride on THE tik toks or whatever the kids are doing these days. Maybe you’re not a skater. Maybe you’re not even a kid. Maybe you have an affinity for stuffed animals and dolls, and want them to be fashionable. Whatever, we don’t judge. Molly the Monkey will look great in one of these.

This comfy tee in a variety of groovy colors has you thinking about a better future for everyone. It’s the ideal accompaniment for delivering meals, sewing face masks, or creating uplifting art for the world. And when you’ve worn it to exhaustion, you can repurpose the super-soft material for your next creative, crafty project.

Whether you choose to cozy up with Tiger King or Love is Blind this snuggly hoodie will get you to the end of Netflix and beyond. You can also use the hood to hide the fact that you haven’t washed your hair in four days because you’ve been binge-watching 30 Rock, Parks & Rec, and The Office.

You put on your bra AND real pants every day, despite not leaving your house. Makeup? Check. Hair? Obviously. Sport this fitted tee with the rest of your on-trend ensemble. Quarantine, but make it fashion. You and your Insta posts will slay in the slim fit! YAS QUEEN!

Using this time to roll up your sleeves and get to work? Planning to scrub, polish, dust, and shine every inch of your domain? This is the perfect shirt for you. Because it has no sleeves! You can skip the first step!

Are you shouting into the abyss? We sure are! This is the perfect tee for everyone who is staying at home indefinitely but holding on to the hope of seeing humanity in person again. Pro tip: The darker colors won’t show your isolation tears.

If you are the master of the home workout this muscle tee is the perfect companion for today’s Zumba, tomorrow’s HIIT, and all your fitness goals. And even if you’re not, you’ll still look the part in this flattering muscle tank. Give everyone a ticket to the gun show!

What would a player say if asked to describe roller derby in one word? For many, it would depend on the day. But that one word can tell you a lot about a skater. Are you silly or serious? Optimist or pessimist? Dreamer or pragmatist? Grizzled vet or eager newbie?

As Rocky Mountain Rollergirls’ 5280 Fight Club gears up for another season, we asked this year’s captains, Motorbutt (#0260) and Daisey Danger (#737) to choose one word that summed up roller derby for them. Interestingly, the answers they gave not only described their feelings about the sport, but also accurately reflected the personalities of these two dedicated players.

Motorbutt (or Motor, for short)  says roller derby is “inspirational.” She started with Rocky in 2013, joining through a new skater program known as Derby Days, where veteran skaters taught basic skills to drop-in and would-be skaters. Originally hailing from Texas, she had been in Denver for just over a year when she saw a flyer at a car wash advertising the event. Motor thought this would be a great opportunity to meet some “badass women” and it didn’t take long before she was one of them. Motor quickly became an integral part of the league, and was a fixture at events, playing in the new skater “Kill Scout” bouts and helping out wherever she could.

When RMRG was securing our new home in the Rollerdome, she put in more hours than anyone to make sure everything worked out. She worked tirelessly, dealing with inefficient contractors, permit issues, and all the other agonizing details that come with building a viable location for skating. It was an exhausting endeavor, and her commitment through the many setbacks and adversities that had to be dealt with was nothing less than inspiring.

Motor was drafted to the Red Riding Hoods in 2014 and after a stint on Contenders, where she first flexed her captain-ing muscles, earned her spot on Fight Club in 2016. Since then she has continued to push herself to be the best skater she can. Sidelined for a season by a serious concussion, she came back stronger and more focused than ever. As a blocker, it seems like she is everywhere at once. But she’s also not afraid to rock the pivot cap when needed, and has saved many a jam with her power and quick feet. As a captain, Motor rides the fine line of firm and kind, holding skaters accountable for their own growth and providing emotional support as needed. She acknowledges the difficulties of her role, working to honor the differing opinions of 20 women is no easy task, but finds gratification in making decisions that build players into better athletes and teammates. Watching Motor’s journey from Kill Scout to Fight Club captain has been amazing, and we are proud to have a homegrown skater like her as our leader, someone whose trajectory into one of Rocky’s top skaters can only be described as inspirational.

Co-captain Daisey Danger described roller derby as “EPIC!” And her rise in the ranks has been just that. Daisey joined Rocky in 2017. She was in her third year skating with local recreational leagues the South Side Derby Dames and High City Derby Divas,  and was looking to play at a more competitive level. She dropped in on an RMRG scrimmage and was thrilled at how welcoming and fun everyone was, and she claims, “they hit so hard I wanted to be like them.” Well, I don’t know what she was doing before, but she is definitely hitting hard now!

Daisey was quickly drafted to her home team, the Sugar Kill Gang, and after less than a year playing with Rocky made the Contenders, the B-level travel team. She played with Contenders for a short time before being moved up to Fight Club and the rest is history. This will be her third season on the charter and she shows no signs of slowing down. It has been so incredible watching Daisey become the skater that she is today. Her strength and agility make her not only a formidable blocker, but a powerful pivot that can bulldoze through opposing lines. Although she is a terrifying force, she is also extraordinarily kind, which has previously earned her the title of “sweetest Sugar” among her home team friends.

Daisey’s kindness and patience make her a perfect choice for Fight Club captain. She seeks to listen and always offers a supportive shoulder to players, letting them vent their frustrations without judgment. Daisey loves getting to travel with her team and sharing a common goal with like-minded people. Her biggest concern in her role as captain is letting her team down, which just goes to show how considerate she is. She feels inspired when the team succeeds together. A locked down wall against a tough jammer makes her “well with pride.” Just another reason she is such a good leader. Daisey’s on track talents, combined with her patience and big heart make her an EPIC teammate and captain. And here’s to an EPIC season as well!

Want to see our captains (and our team) in action? Join us on March 14 when Contenders and Fight Club take on FoCo Roller Derby out of Fort Collins. Follow this link for more information or to purchase tickets.

Saturday October 19 was a big day for the Rocky Mountain Rollergirls, with no shortage of fun being had by many of our league members. One of our favorite people, the sweetest Sugar herself, Daisey Danger was married to her longtime beau, Joey, at an intimate and beautiful ceremony in South Denver. Many members of her home team, the Sugar Kill Gang, were there to celebrate Daisey and Joey’s big day. Everyone looked amazing and a great time was had by all in attendance. The only downfall? Being at Daisey’s wedding meant missing the wedding of ANOTHER Rocky skater, none other than Dooms Daisies’ Devilz Huntress, who celebrated her marriage with a ranch BBQ and no shortage of other skater friends in attendance. Apparently there just aren’t enough days in the year to celebrate all the love in this league separately!

Yet another faction of Rocky found itself promoting the league and getting spooky on South Broadway, when they attended the S. Broadway Halloween parade. Skaters took to the streets to share the derby love and promote the Halloween-themed mix-ups and the upcoming Home Team Champs games. But all merriment was in moderation for members of RMRG’s Contenders, because they knew the had some serious work to do on Sunday morning. At 11:30 Sunday morning, The Contenders faced off against the L.A. Renegades in their final travel team game of the season. The Renegades were in town for a game against Denver Roller Derby’s Standbys, and took the opportunity to squeeze in a “hangover” bout with Rocky (safe to say, that title was more apt than ever). The Renegades squeaked out a win over the Contenders, but if you factor in fun, Conts took the gold! The Contenders would like to give a special THANK YOU to all of the skaters and volunteers who showed up to officiate the game and make things run smoothly. Special guest coaches, including retired skater Carmen Slamdiego (AKA Ho J, AKA Fat Elvis), and the always lovely Peach joined current boss ladies Coacheena and Emma to round out a bench staff that kept things running smoothly on the sidelines. The skaters love and appreciate you all so much! This was the final travel game of the season, so if you want more derby action, don’t miss our league games coming up this Saturday! 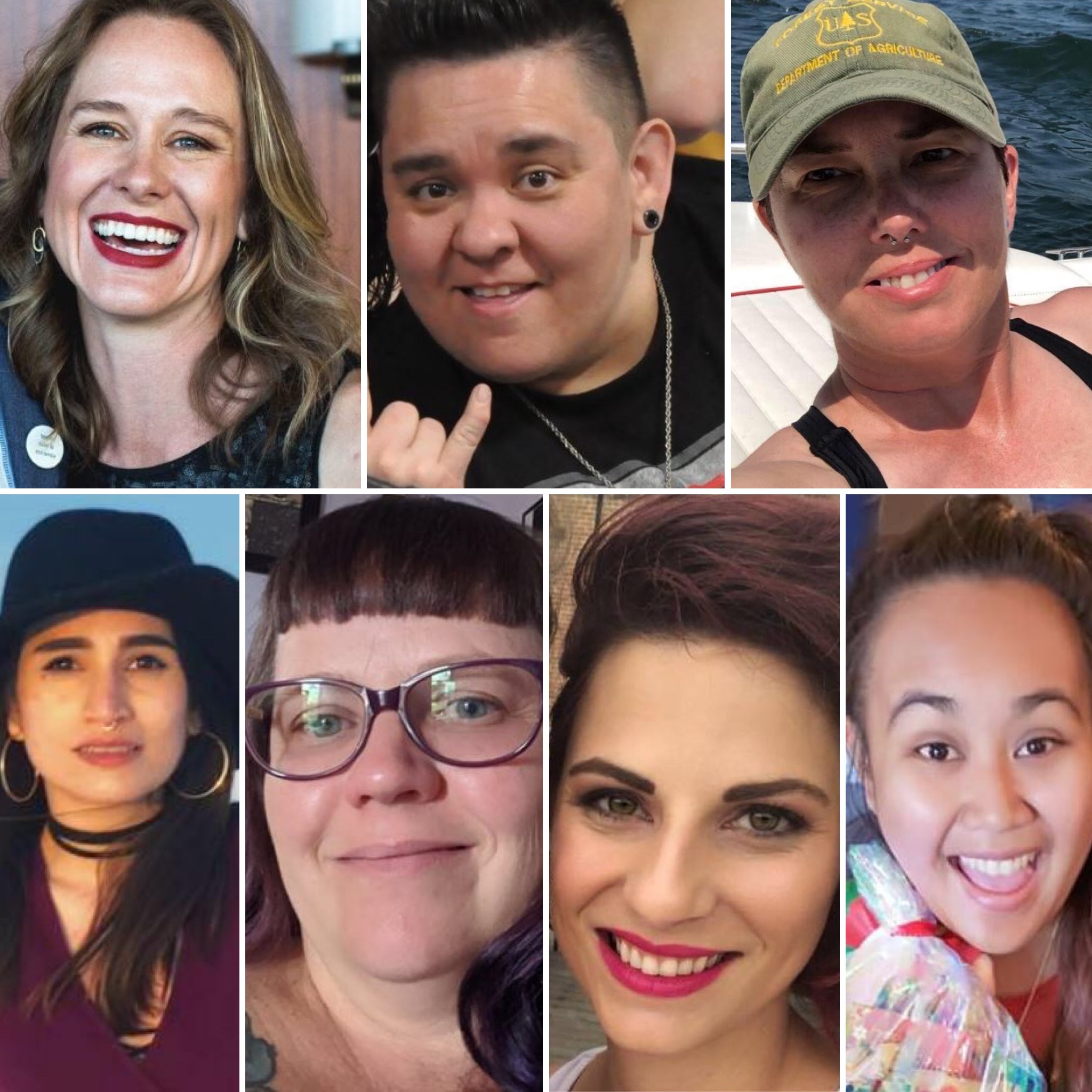