-A Holiday Poem by Justice of the Peach

‘Twas the night before an 8AM game, and all through the house
Every skater was snoring, whoever made the tourney schedule was a louse;
Skate bags were laid by the doorway with care,
In hopes that with prep we could longer snooze, but with alarms loaded for bear
The derby girls were doubled up all snug in their beds;
While visions of jammer points danced in their heads;
And Daisey in her Mickey shirt, and I in my mask,
Had just tucked into bed, to rest for tomorrow’s task,
When out on the hotel lawn there arose such a clatter,
I rose, expecting to see my teammates coming back from the bar,
(that was usually what was the matter.)
I crawled over my bedmate, giving her body a mash
Tore open the curtains and tripped over some shoes with a crash.
The neon from the Conoco shone on the scene below,
Giving a glare bright as noon to a sight that made my amazement grow,
When what to my wondering eyes did I see,
But a miniature track and 10 tiny players coming just up to my knee,
With a little old zebra in stripes black and white,
He must be reffing this Derby elf game on this cold winter night.
More rapid than Scald Eagles the small skaters they came,
And he whistled, and shouted, and called penalties by name:
“Now, Forearm! now, Clockwise! now Low Block and Cutting!
On, Insub! on, Charging! on, Cut Track and Headbutting!
Oh you with the false start! To the back of the wall!
Now sprint away! sprint away! sprint away all!”
Like leaves in the wind the jammers and blockers they fly,
As wall meets with wall, everyone seemed to get almost knocked to the sky;
At half time up to the bench the fey skaters they flew
For their bags full of protein, and snacks for the jolly ref too—
And then, in a twinkling, I heard on the roof
The sounds of small wheels (if I doubted my vision, then here was the proof.)
As I pulled back my head, and was turning around,
Through the peep hole the zebra elf came with a bound.
He was dressed all in stripes, from his head to his foot,
And his whistle was all tarnished from usage and toots;
A bundle of gear he had flung on his back,
And he looked like a hobo just opening his pack.
His eyes—how they twinkled! his dimples, how merry!
Still though I tried to kick Daisy awake, because people walking though doors is scary.
He began to pull out boxes, each done up with a bow,
Apparently health conscious and in the respiratory know
The nib of a vape he held tight in his teeth,
And the mist that smelled of cinnamon, encircled his helm like a wreath;
He had on broad knee pads and a little round belly
That shook under his jersey, like a bowl full of jelly.
He was chubby and plump, a right jolly old ref,
And I laughed when I saw him, though I began to wonder if Daisy was deaf;
By a wink of his eye, and though my roommates slept like the dead,
He soon gave me to know I had nothing to dread;
He spoke not a word, and was silent as he worked,
He filled all the gear bags; with gel shots and meat that had been jerked,
And then with double finger guns, as the sound outside again rose
He gave a nod, and left my teammates and I to our repose;
He sprang to track center, and to his team gave a whistle,
And they all skated away with him behind, flapping a WFTDA rule book like a holiday missal
But I heard him exclaim, ere they went out of sight—
“Happy Bout Day to all, and to all a good night!” 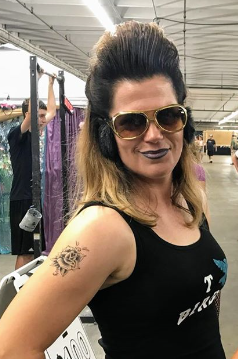